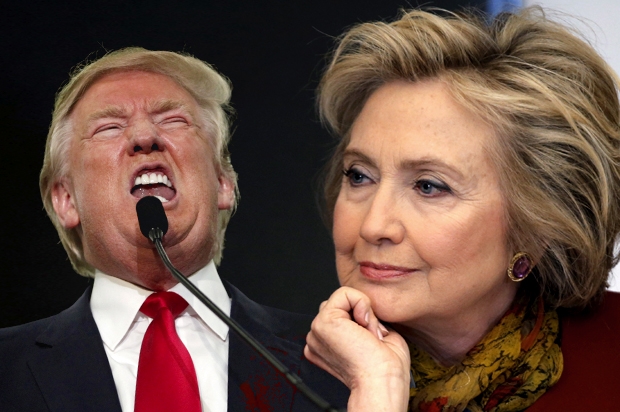 Well, your girl, “She,” “Her,” Hillary, used all of the buzz words last night. I listened half-heartedly as I was conducting a conference call for The National Black Banking Campaign, because that’s where I can really make an impact with my voice. I kept waiting for it and then she finally referenced the very real threat to the lives of Blacks and Latinos in this country. She stopped just short of calling the murderers out by name or alliance. And, that did it, I’m sure. That pushed millions of American African voters that were teetering the line to the other side to stand “with her.”

She’s a magnificently trained politician undoubtedly. She is going to win this election because fear is powerful and the people are not here for “the human Chee-to” as my friend and fellow blogger, Lauren Gay (www.outdoorsydiva.com) , references the candidate known as Trump.

Even though she and Trump were/(are) friends; even though he has been one of the largest contributors in her past campaigns; even though they are two sides of the same blood-stained coin, “her” did such an excellent job of painting Trump as the villain and herself as the phoenix-like, misunderstood, bullied, villainized and victimized heroine,

America will stand with her and vote in droves because we love a cinematic story with a happy ending. So, since that’s a given, and there are enough people perpetuating the fear and convincing others to be “with her,” I’ll take this time to SPEAK to some random observations. Other than to do what your moral compass requires of you, I’m not here to convince anyone to buy into any side in this political melodrama.

3. Chelsea Clinton is a wife and mother of two, one just 5 1/2 weeks old, so I applaud her for even being able to get dressed with matching shoes and not forget to wear undergarments.  Any new mother of multiples understands that the shift from one child to two is life-altering, so compounding that with the pressure of being one president’s daughter and campaigning for the other parent to serve the same role is unfathomable for me. That disclaimer given, she was as exciting as watching my 1-year-old son’s oatmeal curdle, dry, and harden as he tries to feed himself one small grain at a time every morning. I listened to her like I used to listen to Charlie Brown’s mother or my Astronomy professor; a class I endured simply to get the necessary Science credit and easy “A.”

4. You know how when you were little and you would ask for a specific thing from your parents and they’d give you the watered-down imitation of that thing? Maybe you don’t know if you’ve always been rich. But, for those of us who were floating in the lower part of the widest section of the pool called middle class, we know these instances well. Name brand cereal was not commonly seen in our household when I was a little kid. My younger siblings lucked up though as my parents climbed the socio-economic ladder. I would ask for “Cap’n Crunch” and get “Lieutenant Crackle,” or “Apple Jack’s” and get “Pear John’s.” It was never quite the same, and I would pout and begrudgingly accept my portion and feign gratitude as to not be punished. That’s how I honestly feel about “her.”

I really, really, really want Michelle Obama to be POTUS right now. She’s brilliant, fierce, articulate, persuasive, amiable, honest, abreast of the needs of this country and the sub-countries within it (i.e. Black America) even more than her husband really, and she’s gorgeous! Looks matter in politics. She’s who I’d want to lead this nation. I’ve been spoiled by having a First Family that reflected my values and cultural heritage. I haven’t agreed with all of the president’s policies or his lack of advocacy for Black America, but I have appreciated the First Family’s example, impact, presence, and concerts in the White House.

I was ignited and duped like most of us into believing that we were on our way to resolving the racial tension and revising the narrative of this country through politics and the election of the first Black President of the United States. Then Trayvon Martin happened, and Jordan Davis, and Mike Brown, and

Rekia Boyd, and Eric Garner, and the massacre at Mother Emanuel, and Sandra Bland and mass incarceration did not decrease and Black unemployment is still the highest of any other group… and the list goes on and on and on. I was not foolish enough to believe that the president would or even should solve these problems. I was naive enough to believe that Black America would be empowered by their election to solve these problems ourselves, for ourselves, which is the only way they’ll ever be remedied. That didn’t or hasn’t happened. Maybe we need more time. Maybe we were too enamored and lost focus. Maybe, we’ll get it this time if we just have another chance to see the power, beauty, and strength we’ve always possessed on such an international platform. Maybe…..

But, that’s not happening. Now, we’re left with two majority-supported candidates and a list a mile long of third-party candidates, Dr. Jill Stein and former Governor Gary Johnson being two of them, and none of them are Michelle!! Though they all, except Trump, are trying to appeal to me as a woman and as a Black American,  I’m certainly not convinced that the intersection of my Blackness and womanhood will be acknowledged by the “Chee-to” or “her.” Feminism has only included Black women as a footstool and tool to push its own agenda, which never centered around our specific needs. Just ask Sojourner.

I know pouting, stomping, and booing will not benefit me or this process. I know abstaining will give me

no more satisfaction than voting for a non-Michelle candidate. I know the emotive obligation that Black Americans feel that prompts the upwardly mobile or formally educated of us to vote, but misses those of us still completely oppressed in every way by this corrupt system. I know I’ve got to do something other than sulk. Part of that something is fully investing myself in the arduous process of our liberation, which right now is Phase I of Operation Blexit, The National Black Banking Campaign.  As far as politics are concerned, I’m still ready to dump Trump, but not quite sure where I stand with “her” or any other non-Michelle candidate for that matter.

When the expectation of behavior is higher of the DECEASED, “developmentally disabled,” domestically abused woman in…

Did that get your attention?  Last year, I read this New York Times opinion article entitled,…

*Strong language and content. For big Black Girls only.  Pitcher 7: Accountability You find the…