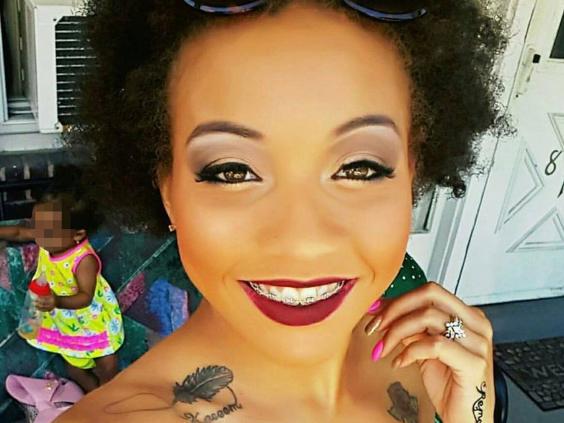 When the expectation of behavior is higher of the DECEASED, “developmentally disabled,” domestically abused woman in her early twenties with a self-documented, adversarial relationship with the cops, holding her son and legally purchased gun than it is for the trained, professional police officers sent to her place of residence to serve a bench warrant for traffic violations, you know we’re completely and almost irreparably lost.

If you fail to see the connection between….

Traffic violations leading to warrants for arrests and deaths for impoverished, predominantly Black and Brown people…

Korryn Gaines’s lack of ownership of her residence and the landlord’s (not a part of her community) granting of permission to the cops to enter and thusly, kill her…

The fact that she had a documented, and public, ongoing dispute with the local police department that stemmed from her advocating for the release of her daughter’s father from prison…..

The fact that we’re at war and she knew it…

Her knowledge of Constitutional law…

Her misunderstood rights granted by the 2nd and 4th Amendment to defend herself in “her” property from the government, of which the cops are agents….

The domestic violence she endured from the man that took flight and the dismissal of those charges upon her death….

The created cycle of poverty that led her to lead exposure, lack of ownership of property, and to being the target of police profiting through excessive fines for misdemeanors while murderers walk freely…

The silencing of her voice on social media and the selective release of some of her documented relationship with the police….

The way she’s being vilified and stigmatized while the officers’ names and faces are being withheld for their protection….

The fact that every one of us, every single person of color (especially Black), in America is functioning under duress and some form of PTSD, but some of us have been privileged with more tools through experience or our formal education to suppress its symptoms more than others of us….

The fact that her death is being erased and/or defended, and her actions judged and criticized by her own people, Black women especially….

The fact that we have adopted the individuality of White America and detached ourselves from ourselves to the extent that we no longer see the humanity in each other and therefore cannot understand how a 23-year-old, impoverished, single mother of two young children who has been personally harassed by the police and collectively terrorized by the same with the visual and tangible reminders of their overreaching authority over the lives of the disenfranchised can reach a breaking point and somehow believe she has the right and no other choice but to protect herself and her child in her own home…..

The fact that we’re not the narrators of this story once again….

Until the Story of the hunt is told by the Lion, the tale of the hunt will always glorify the hunter. -African Proverb

The fact that the public (including many Black people) and media always jump to the defense of the cops by offering the benefit of the doubt and never the slain, but instead find blame there….

The fact that she believed her previous violent interaction with the police where she was the victim of physical assault ultimately led to her miscarriage, and therefore her fear was indeed rational……

The fact that Black America, most of which without mental health care training, has now adopted the narrative that in order to be noncompliant with police if you feel their methods are unjust, vocally expressive with your opposition to their authority over our lives, and willing to put yourself in a position of authority in their presence, then you must be mentally ill and thusly deadly force is justified…

With the fact that only we can save ourselves once we see ourselves as one and pour our resources back into creating and reestablishing our own communities, then that answers why we’re still in dire straights.

Korryn Gaines is a martyr in the war against injustice. There are many, highly educated, confused about the definition of the word or who are confusing it with the term “hero.” She doesn’t have to be your personal hero to be a martyr. They don’t mean the same thing.Your fear of what will happen if others know she’s a martyr doesn’t change the fact that she is. Fear has never altered fact. She doesn’t have to be “right” in your eyes to be a martyr. Martyrdom is not reserved for the innocent or the upstanding individual. It’s not just meant for the popular or the one who serves or saves others. Oftentimes, they are not law-abiding citizens and act alone. They are not typically considered rational, compliant, or civil. They do not follow strategies with whom the general public agrees. They are martyrs not because they are flawless, but because they knowingly and willingly risk and lose their lives to stand up for what they believe. They challenge injustice.

She is a martyr because she was willing and did die for her beliefs that the enforced laws and force used by American police officers is unjust.

“If you haven’t found something worth dying for, you aren’t fit to be living.” – Martyr Martin Luther King, Jr.

She believed the rules of self-defense were discriminatory and do not apply to White males or females in the same way they apply to Black males and females. She was willing to die to illustrate that point. That makes her a martyr. Until we learn the lesson she was willing to sacrifice her life to teach and come together to restore our communities, we’ll continue to have more casualties to add to our long list of hash tags. I pray, for the sake of your posthumous reputation, that you’re not one of them.

We real fools. We
Left Black schools. We

moved away. We
Brain drained. We

Spend white. We
don’t unite. We

On Raising Our Children

The complex, layered, public life of Kobe Bryant and his still surreal and untimely death has vexed most of us. I'm still not ok. Many of us still aren't ok.