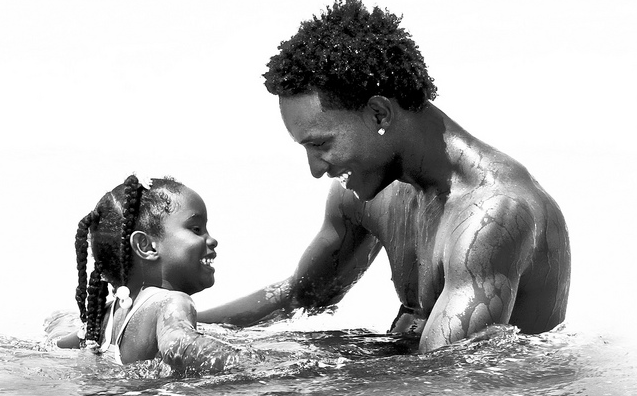 *Strong language and content. For big Black Girls only.

You must wear it like she wears disappointment on her face. Your mother is a woman and women like her cannot be contained. Mother dearest, let me inherit the earth. Teach me how to make him beg. Let me make up for the years he made you wait. Did he bend your reflection? Did he make you forget your own name? Did he convince you he was a god? Did you get on your knees daily? Do his eyes close like doors? Are you a slave to the back of his head?

Am I talking about your husband or your father?

My father is a country boy from the deep, deep South; so deep in the South, his town doesn’t show up on Google Maps. With a high school diploma and 2 years of military service underneath his belt, he hitch-hiked his way West to make a better life for himself.

He never looked back.

When he made it to California, he worked on the assembly line making planes for McDonald Douglas and saved up enough money to start his own construction company using trades that he learned from his father back in the country – carpentry and masonry.

He became a millionaire.

He met my mother in the grocery store. He followed her through the frozen food section until finally she stopped her cart and talked to him. He lived at the top of the hill, in a home he designed and built with the help of his brothers and his uncle. She lived at the bottom of the hill. Brand new to California, she was trying to find her own way in this big town.

She moved in with him at the top of the hill.

For years they lived together. They never married because they had both done that before unsuccessfully. But, they were partners. And, seven years later, I was born.

He bought us anything we wanted; far more than we needed. He made sure we had it all. As stoic as he could be from time to time, I knew he loved us. I loved him and respected him. He was my daddy.

And then, I answered the phone.

I was in high school. Early one afternoon, as I was doing homework in my daddy’s home office,

his phone rang. I answered it. She hung up on me. The phone rang again and it was her. She did
not say much, but I gathered quickly who she was. This time, I gave the phone to my mother.

I lost respect for both of them.

My mother stayed. For my sake, I suppose. Maybe, it was for her dignity or for show. Perhaps, she stayed for comfort, or fear of starting over again.

In hindsight, I lost respect for myself as well. The way I viewed relationships with men was warped. I trusted no one. I doubted myself constantly, and acted out of my character. I rebelled in every way possible and became the rogue child that couldn’t be contained.

My mother’s heart was broken.

My heart was broken.

We were a broken family.

It was the one thing I didn’t learn how to fix.

Somehow, we lived like that for years.  ‘Ms. Lynwood’ was still somehow involved in our lives. With broken hearts and confused understandings about what ‘love and trust’ actually meant, we lived in the big house on top of the hill. It became one of the top reasons I decided to leave.

They say, ‘time heals all wounds’. Twenty years later, after years of self-therapy, meeting a mate who was patient enough for me to relearn what love and trust meant, and learning to let go and no longer give a fuck, I have forgiven.  And, while it took time to fully regain respect for both my parents (and myself), I ultimately realized, I always loved them and they still loved me.

need.  Love through the disappointment, the brokenness, the hurt.

Whatever you do, continue to love and take accountability for doing so.

Until the conversation about each of the phases is complete, you’ll hear the voices of various contributors who will dissect the recently released, updated Black Woman Manifesto: “Lemonade.” This post is specifically about “Accountability.” Some of the contributors have chosen to use a pseudonym. Others have chosen to submit inspired works of fiction. If any name used reflects that of someone in reality, it is only by coincidence. Read all other posts at www.blackgirlspeaks.me .

Today was Day 1 with my new personal trainer, and I barely made it.