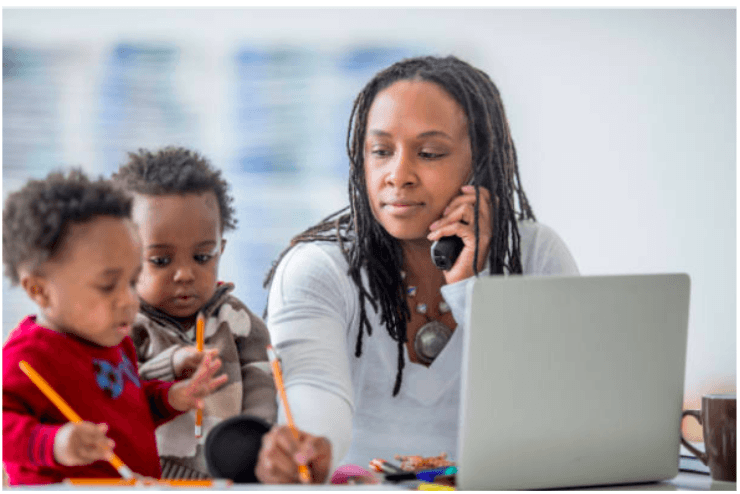 COVID-19….the Corona virus…or the ‘Rona as I tend to call it, brought so many things to light in just a matter of days. Our “strong” economy went from flourishing to struggle mode. Our healthcare system went from top notch to over-taxed. ‘Rona put people out of work as so many of our service providers – waiters, barbers, hairdressers, airline employees, bartenders, etc. could no longer perform their jobs due to social distancing. Some of us were deemed essential and asked to return to work even in the midst of the growing pandemic. Others of us found that our jobs that “could not be performed from home” just weeks ago were now given the equipment, tools, and approval to proceed with working from home. Airlines went from charging $25 for your checked bag to charging $35 for the whole damn flight. Night and day. As the NBA and MLB suspended their seasons, we learned that we could survive without sports, but as schools closed for weeks….and then indefinitely until the next school year, many of us found that we can’t survive 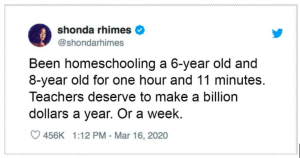 without teachers. As many of us were thrust into the roll of being both parent and teacher, full time employee and full time homemaker, we quickly realized that teachers should get paid trillions of dollars a year for the work that they do. So while there aren’t enough tongues in the world to give enough thanks for the work that our doctors, nurses, hospital employees, grocery store employees, first responders, and military are doing to save lives — even at the risk of their own health — this writing is to acknowledge the overlooked heroes who are front line responders every day during this pandemic. The working-parents-turned-teachers.

This experience has put a lot of stress on the anxious parent(s). The perfectionist parent(s). The “you can’t bring home a C” parent(s). The “you have do twice as good to be thought half as good” parent(s). We are not okay. Working from home has become work-and-teach from home. Our full time job has become multiple full time jobs as we take on the task of bringing home the bacon, serving it up for breakfast, teaching our kids where the pig comes from, chopping it up for the lunchtime Cobb salad, and doing a lesson on pork barrel politics. It’s tew much. We read the Facebook posts and listen to the motivational speakers who tell us that this quarantine is a golden opportunity to work on that book we’ve always wanted to write, or finally read that novel…to put together that scrap book, or finally rearrange our closest. We read and we listen and then we kick ourselves because we feel like a failure for “squandering” this opportunity when the world is standing still. We feel like we will come out of this experience even more exhausted than before, with a “bucket list” that is as long as it ever was, and we will once again find ourselves behind the curve of everyone who used this time to start that business, buy those stocks, or take that class. Our DVR will still be full, we’ll still only be two episodes in on Tiger King, and the quarantine 15 will have made our birthday goal weight that much harder to attain. Even the newfound online activities that are meant to bring us joy or relax us in the midst of all of the panic causes undue anxiety as we suffer from FOMO (fear of missing out). Anthony Hamilton at 5, Kem at 7, what time was the HBCU day party again….and dammit I missed Jennifer Hudson and the latest D-Nice party. Overload. All while we work…..and…..educate our children.

Honestly, when everything first happened and schools first closed, I was kind of excited about the prospect of teaching my kids. I was going to finally teach them that there were several black game changers whose initials didn’t start with MLK. We were going to take walks outside and look at the leaves and the trees for science class. P.E. would be online Yoga and I would finally teach them the words to the Black National Anthem. There would be cooking and learning new languages and coding, or so I thought…and then, worksheets hit. Assignments came. Teachers woke up to the news that their school year had abruptly ended and decided that we, the parents, would now take up the torch and finish out the lesson plans that they had so 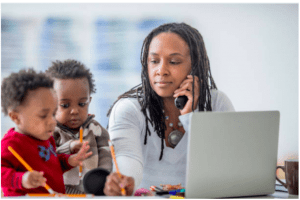 meticulously planned for our babies, their students. To be clear, this is not an indictment on the teachers. They, like all of us, had to quickly come up with a way to adapt and keep the educational wheels turning, but this.tew.much. An article quickly circulated touting the 20 best free educational apps for kids and, as a super parent, I immediately started the task of researching them all. Teachers did as well obviously, because by the end of the first week, my kids were signed up for nothing short of 10 online learning mediums, each with their own logins. Fix it Jesus. We started our “school day” every morning at 8 and by 5 we were still at it. As we completed the tasks and assignments of the day I would receive the horrifying sound of a notification alert on my phone and would be greeted with the list of assignments for the next day, times three, one for each child. I cried. Literally. Convinced that I would now be single-handedly responsible for my child being behind next year if I didn’t somehow get them through all of this work and assignments, each day I would forge ahead and drive them through the work from morning into the evening – whatever it took to get it done. They were stressed and exhausted. Secretly, I think they were praying that the schools would reopen so they could go back to “real school” where they could at least eat lunch and have recess without having a worksheet shoved in their face. I secretly wished the same. I felt like a failure – a failure at teaching my children. A failure at work (which no longer received my undivided attention). A failure at using this down time to do and be something great. 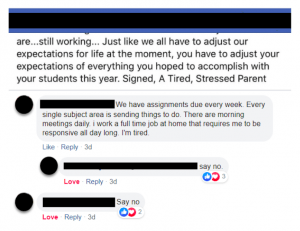 was so simple, it was brilliant. Honestly, as the overachiever-I-can-do-all-things type, it was a message that honestly never even crossed my mind. As I posted my message to vent and say “I have no idea how I’m going to get all of this done” the response that was posted simply said “say no”. Say.No. *cue music and lightbulb over my head* In all of the things that I thought to say or do to manage this workload, to manage the lesson plans, to manage the domestic requirements…the carefully worded email that I drafted and edited a million times to send to my kids’ teachers, it never, EVER dawned on me to just say NO. To say “I can’t”. To say this is too much. Everything in us is wired to push to our limits, to give everything, to “die trying”. Die trying? Who in the hell wants to do that? But the reality is that many of us aren’t naturally wired to just.say.no. And when I tell you that the genius who wrote this knows us (the overachieving-never-say-no-types) so well, that anytime someone responded to my post after that, her response would be the same. Say no. Say no chile! For the love of God say no!

So that’s what I did. I added a few more words here and there to make it sound cute, but the jist of it was NO! I sent an email to their teachers and the principal to let them know that I was  fully on board with helping my children continue to learn, but that we were not going to be able to complete the 10 worksheets, 2 online classes, and the science experiment that they sent home. No. I stressed that they were going to have to adapt, as we all are, to this new normal for the next few months and temper our expectations of what we thought would be accomplished during that time. En Oh. I stated that we would prioritize the work received based on the areas where our children needed the most development. Niet. Nahi. Nein. To my surprise the teachers and principal were receptive. They, like all of us, were trying to figure out the right balance in how to proceed in these times. The weekend following that response, we took our children fishing. We talked about agriculture and currents. We talked about the types of fish that could be found in the bodies of water in our area. We talked about the ocean that borders us. We had science by the lake and it was wonderful and yes, even without a worksheet, it was learning.

About a year ago a picture was posted of a mother of four cooking, breastfeeding one baby, and helping another with his homework while two other played at her feet. While the picture was celebrated and applauded in the media, the picture actually upset me. We can no longer celebrate wearing ourselves out until we have nothing left to give. We really have to stop celebrating the fact that we are dying trying. In these times, if you are that parent who is homeschooling and working a 9 to 5, or if you’re a parent who is homeschooling and just working on keeping your sanity. Maybe you’re the parent who still has to go out and work and come home to kids who have been cooped up in the house all day and now demand your attention. You might be the parent who is home all day with no idea on how or when you will get to work again. Wherever you fall on the scale during these trying times AND even when things return back to “normal”, work to find the places in your life where you can say no. We must realize that every no we say to something that brings added stress and anxiety…every time we say “no” to something that we really don’t want to do….every time we say “no” to something that doesn’t feed our spirit or align with our goals in life, we are simultaneously saying yes to taking care of ourselves and improving our own wellness. Give yourself some grace and deposit a “yes” into yourself. Each personal “yes” deposit means another opportunity to live doing instead of die trying.

–J. Galloway  is a wife and mother of two and a recovering perfectionist. In her dreams, she is a full-time writer, but for now she is a part-time blogger, full-time federal employee, full-time homeschooler, and a full-time domestic engineer, which means she has little to no time left. She writes about topics that impact Black women and is a mental health advocate for veterans and the Black community. Her daily mantras include reminding herself that 99 and a half is more than sufficient, and remembering to put on her own safety mask before trying to save others. To read more of her work please visit www.justwomannosuper.com.

Kobe Bryant is Gone, but His Legacy and Lessons Live On: 40 Lessons in 40 Years Series

...we have been humbled and reminded yet again of the fragility and sacredness of life. We know once we enter this world, we begin our journey towards leaving it.
Copyright Black Girl Speaks. Designed By TK Consulting & Design, LLC. 2023 - All Rights Reserved
Back To Top
×