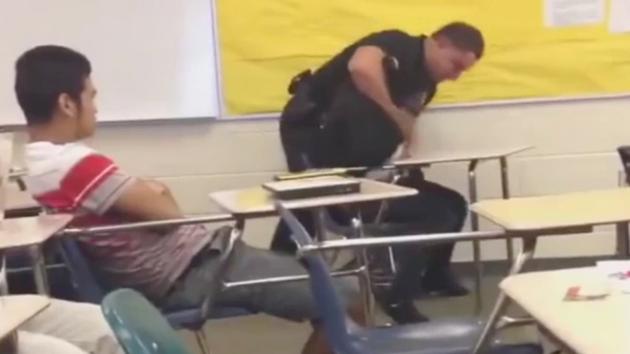 All ya’ll simple, handkerchief head, funky-breath, sell-out, booty clinchin’, holes of ass that think the girl being flung like a dingy wife beater at a pick up game was deserving can suck loose shit from a straw and die!

We got rebel flag waving, third-grade level reading, squinty-eyed, slimy motherfuckas with bowl haircuts shooting up our history in a black church, and our leader, and our aunties, and our uncle, and our brother, and our grandmas,  and he gets a double Whopper with cheese. Prolly’ got fresh fries and pop. And you think the little black girl SITTING in her desk deserves a wrestling match with the Incredible Fuck because she… wait for it….decided to be a teenager and defy some shit?!

Did she blow a motherfucka up?!  Was she packing weapons of mass motherfuckin’ destruction?!  Did she shoot up a fuckin’ movie theater while folks tryin’ to watch the Batman?! (Best Superhero Ever) Hell nawl! And, THAT crazy motherfucka got to walk back to his car before his peaceful arrest!

Ya’ll backwards ass motherfuckas out here believing it’s ok to suspend a black man from work because he put hands on his own damn child or that another one should go to FUCKING JAIL for some FUCKING DOGS, but this swollen motherfuckin’ rent-a-cop can body slam a sitting teenage girl in front of an entire classroom and arrest her ass for disrupting the peace.  You gotta be fuckin’ kidding me!

I know kids in a classroom ain’t nothin’ nice in high school. And, some of them shits is bad as fuck.  But, this was beyond the call of duty boy scout. And, I don’t give two fucks or a bag of Flamin’ Hots about what racist ass white motherfuckas gotta say about any fucking thing. They been saying the same dog shit since they drug, maimed, raped, killed, and stole our asses to bring us here and build this whole fuckin’ country!

(Because sometimes civility doesn’t get the point across.)

Do It For the Vine

Affluent white men in expensive cotton tees or custom suits sit around exclusive cafes in Hollywood and casually create movies about the type of life we’re living here in Singapore. Of course, the characters never look like us because that would make…

It's one of my favorite times of the year! February 1st marks the beginning of…

Choosing to Be the Other Woman: The Stench of Emptiness

Choosing to Be the Other Woman: The Stench of Emptiness *Strong language and content. For…